A river and sea province

The Pontevedra province offers the best location and climate conditions for the practice of diverse active tourism activities.

In one hand we have the coastal region, specially the Rías Baixas, with a lengh of 500km (311 miles), where the Atlantic offers many possiblities for water activities. Many activities can be enjoyed in the surface, in the rich seabed or in the beaches of this sinuous coastline.

On the other hand, in the inland region, rivers, rapids, gullies, mountains and paths make it possible to enjoy action sports. Some of these sports allow to quietly enjoy our landscape, gastronomy, small villages and peoples, and some others are risky and defy nature, they are all for adventurous people.

Rías and Rivers of the Pontevedra province

One of the most representative geographical aspects of the Iberian north-western region are the rías. These inlets are present throughout the Galician coast, both in the Atlantic Ocean and in the Bay of Biscay, form the limit with Asturias to near the Portuguese border. The rías represent a big part of the 1,720km of coastline, nearly 800 beaches, estuaries and several isles, where the landscape and biological diversity, as well as the climate differences, offer a singular nature an unique locations.

About rivers we can find on this location the Miño River, is the most important river of northern Iberian peninsula. It has a length of 350km and covers three provinces: Lugo, Ourense and Pontevedra It enters the POntevedra province in the municipality of Crecente, and then continues trhough Arbo, Salvaterra do Miño, Salceda de Caselas, Tui, Tominño O Rosal and A Guarda. Although it is teh natural border with Portugal, several bridges link this country with Galicia in Tui, Arbo and Salvaterra do MIño. This estuary is navigable by a ferry that crsosses the river from aA guarda to the Portugese location of Caminha. Many of wild water activities are practice in this river.

Other rivers and affluents passing through Galicia:

River Ulla, this is a fast-flowing and long river - 132km - located across the provinces of Lugo, a Coruña and Pontevedra.
River Deza, It is an affluent of River Ulla that covers a distance of 50km and rises in Pena de Francia.
River Tea, the main affluent of Baixo Miño in the Pontevedra province has a lengt of 50km.
River Tamuxe, affluent of River Miño that covers the municipalities of O Rosal and Oia.
River Deva, Affluent of river Miño that has a lengh of more than 50km.
River Umia, It covers an are of 400km2 and crosses several municipalities.
River Lérez, it has its source in the Candeán mountain range and crosses Forccarei, Cerdedo, Campo, Lameiro,Barro and Pontevedra. It flows into the Ría of Pontevedra.
River Louro, this affluent of river Miño has a length of 30km.
Rivers Verdugo and Oitavén, they have an area of 176km2 and get together in the municipality of Soutomaior. 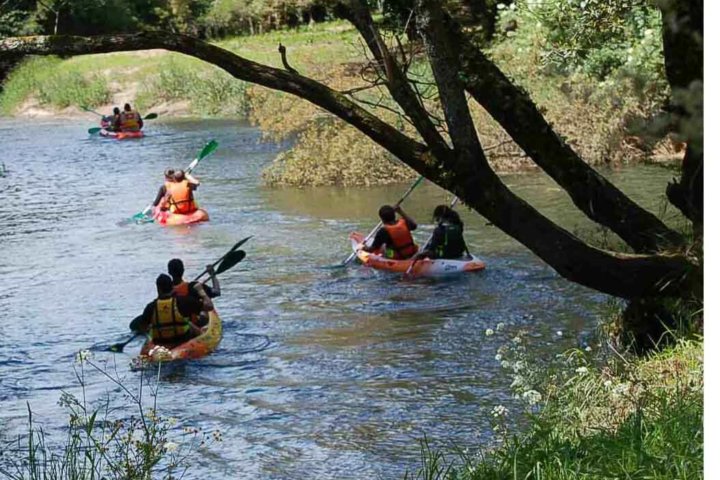